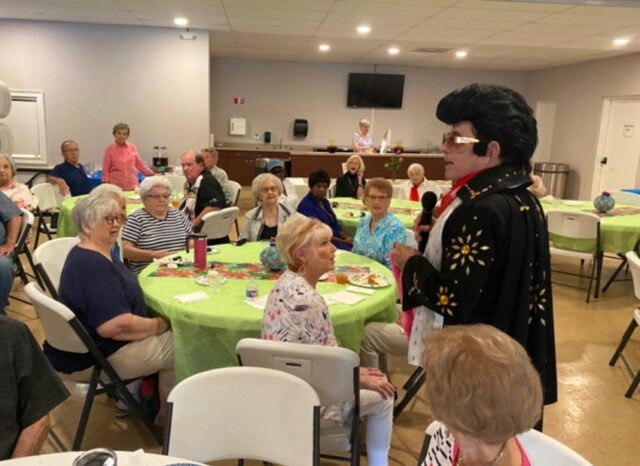 None more leery than Jamae James, when she realized that ‘Nerd E’ (Elvis) was singling her out with a hilarious singing telegram with a reconstructed version of Elvis’ “Suspicious Minds,” that included Ms. James’ nickname (Lulu), her high school (Durant High), birthday
(November 22), and her boyfriend’s name (John).

Friends of the Senior Center got together to surprise Ms. James, as a fun gesture, knowing what a huge Elvis fan she is. Ms. James took it all in stride, planting one on the impersonator, taking him by surprise. “She was a lot of fun,” said the ‘Nerd E’ Elvis (aka Robin Knowles). “It’s always more fun when you have someone who engages
with you.”

The ‘Nerd E’ Elvis gram got a lot of laughs at the Blue Hawaii themed Elvis Week Luncheon with nearly 50 guests in attendance. Part of the act included ‘Nerd E’ Elvis presenting a few guests with Hawaiian leis, and giving away prizes to those getting the correct answers to some Elvis trivia questions.

The Elvis Week celebration also included duo entertainers, Hank & Nora, provided by Creative Aging. Guests enjoy a variety of 60s music, a delicious lunch consisting of Zaxby’s chicken fingers, along with sides, and dessert. The movie Blue Hawaii played on the 70” screen in the background.

Upon ‘Nerd E’ Elvis’ departure, and right on cue, the crowd gave a big “Elvis has left the building,” shout out. It was the perfect ending to the tribute honoring the 45th anniversary of Elvis Presley’s passing.

“We’ve had some fun Elvis Week tributes in the past, but this one tops them all,” said senior center volunteer Barbara Taylor. “We will have to put our thinking caps on to top this year’s event.”