Meeting with the Lakeland School Board (LSB) in their business session Jan. 9, Dr. Horrell said he received the final intent information from Arlington Community Schools.  The figures indicate 112 students will be in the eighth grade when the school opens, with 150 in the seventh grade.  He said the fifth and sixth graders will come directly from Lakeland Elementary School (LES).

Also coming into the Lakeland School System (LSS) for the first time will be Lakeland students who are attending Donelson Elementary School (DES) in Arlington.  Dr. Horrell said 60 percent of those students will be coming to the Lakeland System.  Those parents whose students remain at DES must provide their own transportation to the Arlington schools starting in August.

Dr. Horrell expects initial postings this week for general education teaching positions, with others to come later.  There will be no offers made to teacher candidates until the Arlington Middle School (AMS) teachers who are being displaced can interview for LSS jobs in late February, he said.

Because students will be leaving AMS for LMPS, the Arlington system will not need as many teachers. Arlington will give a list of displaced teachers to the Lakeland system by Feb. 15, said Dr. Horrell.    He also said LES teachers can ask to be transferred to LMPS.

He noted that LES will need two more teachers for next school year.

Dr. Jim Mitchell, founding partner of Southern Educational Strategies LLC, reported on the status of LMPS with slides of construction progress.  “Construction is progressing well at LMPS,” he said, despite the frosty weather.  He explained that one of the most important placements is the permanent electrical transformer.  “This means the contractors no longer have to use generators,” he said.  Other slides showed the main electrical room, copper water pipes, a hallway and main front lobby.

“There is a lot of work going on. The roof is on 20 to 30 percent of the building and they will start bringing in the heating system, said Dr. Mitchell.   He said bids have been awarded for a variety of items including science and kitchen equipment, gym bleachers, musical instruments, classroom furniture and fire extinguishers.

School Board members voted on officers for this year and re-appointed the same officials: Kevin Floyd as chair; Laura Harrison, vice chair; and Teresa Henry and Geoff Hicks, legislative representatives.

Mr. Hicks reviewed the 2017 legislative agenda the Board expects to present to lawmakers in Nashville.  There are two major categories: local control of schools and funding. Changes could be made to the list pending bills presented or requests from LSB members.

Among points under the local control category are the appointment of, instead of the election of, a school superintendent and the right to choose tests for end-of-year assessments.

Dr. Horrell said the controversy over some property surrounding the LMPS site has been resolved.    He said the Rudolph Jones family has signed deeds to Shelby County. The County must now sign off on LMPS construction plans. Then that construction can be completed.  The possibility of a condemnation process won’t likely take place, said Dr. Horrell.

In approving a budget calendar, Mr. Floyd said he would like to consider adding a salary increase for the superintendent, landscaping at LES and longevity bonuses.

Other approvals were resolutions for an interlocal with Lakeland to share HR/payroll and IT services, an extension lease with Tower Ventures (cell tower to be built on LES property), grading systems, testing programs, family life education, honor roll and awards middle school credits.

Dr. Horrell acknowledged Lakeland Commissioner Sherri Gallick whose last day on the Commission will be Jan. 12.  “I want to acknowledge her contributions and support to the Lakeland School System,” he said.  A reception for her at 5 p.m. Jan. 12 will preceed the regular Commission meeting. 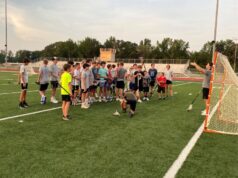 Lakeland Lacrosse Program On The Rise